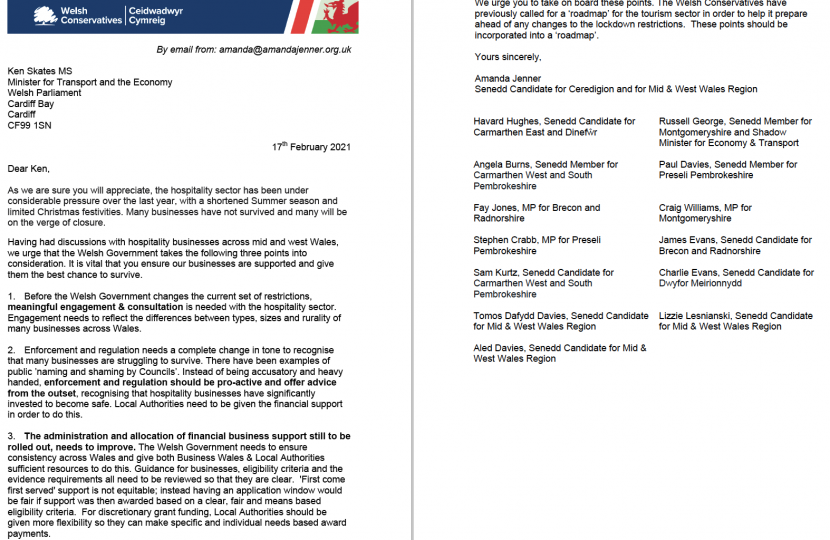 A remote meeting, organised by Amanda Jenner and Havard Hughes (Senedd Candidate for Carmarthen East and Dinefwr), was held on 11th February, in order to hear from hospitality businesses across west Wales.  Amanda Jenner has since written to Ken Skates, the Welsh Minister for Economy and Transport, calling for the Welsh Government to take on board three key points to help support the hospitality sector. Co-signatories to the letter include Conservative Senedd Members, MPs and candidates from across mid and west Wales.

The meeting was attended by a variety of businesses who voiced concerns and fed back their experiences from over the last year. Attending the meeting was also Simon Baynes MP, the UK Government Ambassador for Small Businesses in Wales.

"During our meeting, a number of businesses raised concerns about the lack of engagement with the sector from Welsh Government. Also raised was the issue of heavy handed enforcement of Covid regulations and concerns voiced about businesses being named and shamed publicly.

I have written to Ken Skates to ask him to consider three key points, which include meaningful engagement with the sector, a change in tone for enforcement and a review of the way financial business support is administered.

Many rural businesses are doing their best to comply with unclear regulations, often enforced at the last minute. I believe a change of tone is needed so that they are led through the process and given proactive advice. However, local authorities need to be given the appropriate resources and financial support in order to ensure this happens.

We also heard from businesses who had struggled to get appropriate financial support, giving examples of inconsistencies across Wales, unclear guidance and a lack of help from either their local authority or Business Wales. I have written to the Welsh Government Minister highlighting this and calling for some specific improvements in this regard.

The Welsh Government needs to go the extra mile to assist hospitality businesses.  Mid and west Wales might be a long way from Cardiff, but our economy matters too and local businesses needed to be treated with the respect they deserve.”

The Welsh Conservatives have selected Amanda Jenner as their candidate for Ceredigion in next year’s Senedd elections.

The Commonwealth, G7 and NATO Summits